A great example of strategy tightly coupled with agility/fast-product-feedback-loops: Toyota and the Toyota Production System

The aim of the Toyota Production System (“TPS”) is “making the vehicles ordered by customers in the quickest and most efficient way, in order to deliver the vehicles as quickly as possible” (emphasis is mine).

In other words, the TPS is the mechanism that Toyota uses to build a lean / agile / high mobility mentality into its production lifecycle from order to delivery. The TPS supports Toyota’s overall strategy of building the most reliable and lowest total-cost-of-ownership cars in the world.

All workers are obligated to improve any process they can to improve speed and reduce waste in the production line. They’re not just permitted to improve, but obligated… in other words, they’re not allowed not to speak up to their manager if they see an opportunity for improvement.

Why is speed so important that TPS’s objective mentions it twice? Faster design, ordering, and delivery of cars means Toyota can innovate faster, respond faster to customer needs, and have new ideas in the market faster than its competitors. Faster throughput also means less inventory and thus less resistance by dealers to push new models into the pipeline.

Workers need not run ideas up a chain of command, wait for a response from a committee that meets monthly, and then implement. They can decide on the frontline, in real time, when they are in line with the overall strategy and when speed can be used in such a situation to improve responsiveness to customers.

In Chet Richards’ book, “Certain to Win”, he shared the story of the Honda-Yamaha War, known as the “H-Y War”.

It started in 1981. If you were a young kid in Japan in the early 1980s, you likely wanted a scooter or a motorbike. Those were the dream products that reflected Japan’s newly-emerged engineering leadership, freedom, and economic growth. Yamaha opened a new factory with the expressed intent to become the world’s leading motorcycle manufacturer—a direct shot at Honda, the reigning leader.

How would a typical competitor, in Honda’s role, respond? With more marketing? By opening an even bigger factory? By cutting prices? Not in this case.

Honda responded as a lean startup should—by cycling as fast as possible through new models, learning from each, listening to customers, and using speed and agility as its principle strengths. Their new models evolved so fast that they influenced what the public wanted.

In 1981, Honda had sixty models. Over the next eighteen months, they introduced 113 new ones. Each model was replacing a prior one; each one was more attuned to their customers. While Yamaha’s new factory could produce a large number of models, their ability to keep up with the pace of change was limited. In the same time period, they introduced only thirty-seven new models.

How was Honda able to do it? They acted like a lean startup. They operated with a fast-product-feedback-loop so fast that Yamaha wasn’t even able to register the changes and updates they were making. Yamaha was so outmaneuvered they were left confused and disoriented to the point where they surrendered and announced, “We want to end the H-Y Way. It was our fault.”

You’re looking to build feedback loops into your products and customer experience so that every user helps you get smarter over time.

Seeing what users click on (and what they don’t) are obvious UI data points, as are user feedback and rating scores.

Particularly interesting, though, is when users can contribute small bits of content that become part of everyone else’s experience; those products become especially valuable. For example, with the GPS-enabled app Waze, users can press a button while driving to share the location of a speed trap or a broken-down car. Waze then uses this information to alert other drivers. A click by one driver can create a valuable improvement in the user experiences of thousands of other users.

Google’s Nest thermostat claims to do something similar: when a few users adjust their thermostat, it uses that data feedback to determine how to improve its algorithm for managing all of its users’ temperature. 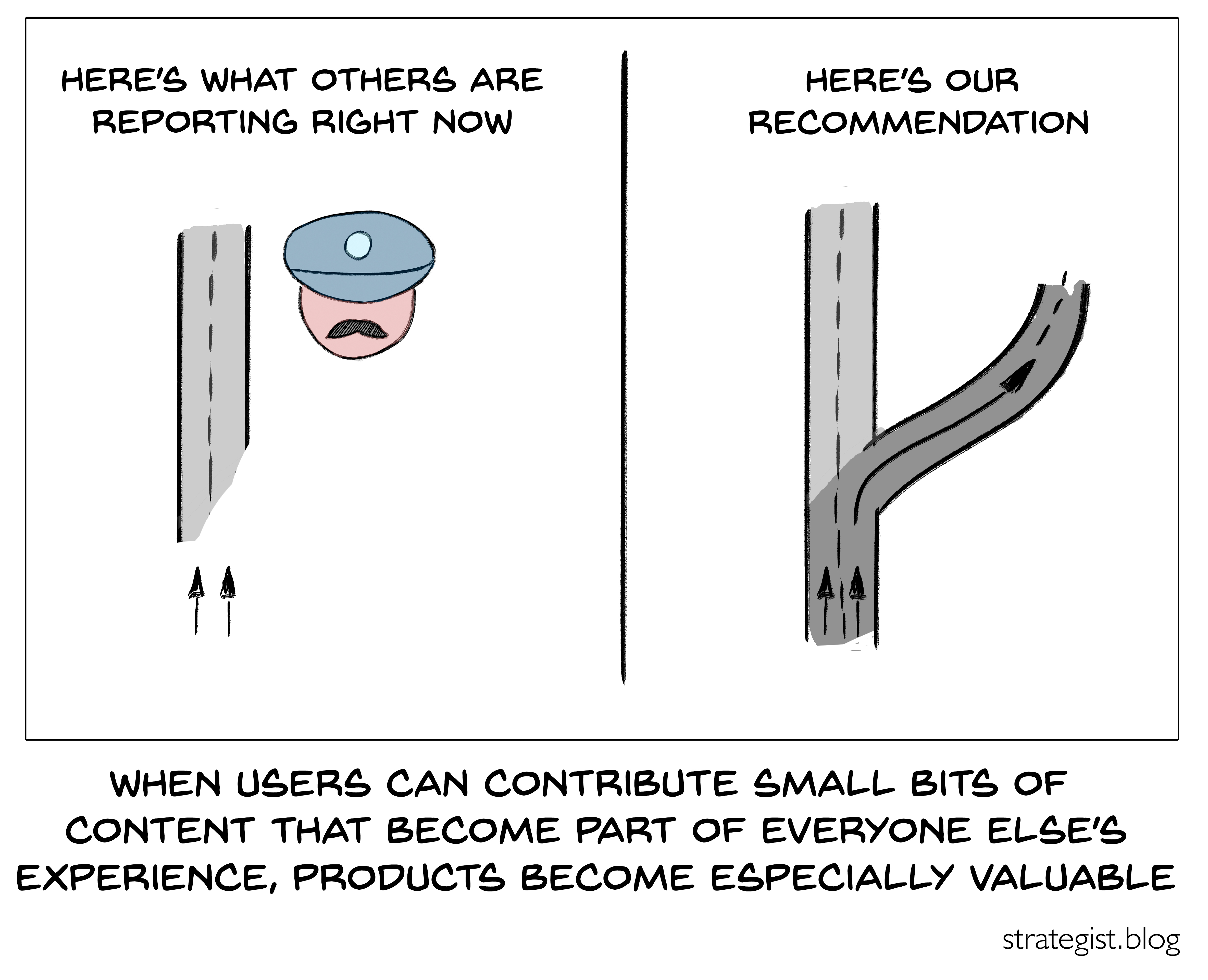 These are examples of a positive-feedback-loop: the more a user uses a feature, the more value is created in the system. Contrast that to most physical goods sales: the more a customer handles a book in a bookstore, the less new the book looks. And more customers reading a book doesn’t help make the book better for future readers.

Flywheels create network effects, which, once you have a critical mass of users become their own source of competitive advantage.

Tesla outdoes them all

Tesla cars send driving and user interaction data back to their engineers on a daily basis. The engineers review the data and update the operating system. The updates are then pushed out to all of the cars nightly. Tesla cars upgrade like a web-based platform does… constantly, with no work required by the user, and for no additional cost.

The changes Tesla is making to the UI on the touchscreen dashboard would require a complete rebuild of the dashboard for almost all other car manufacturers.

Compare that to the standard model of releasing a new version of a car once a year for those who buy the new version; those who don’t buy a new car every year get no updates. And even then, the annual updates are minor, largely uninformed by any actual data of driving activity of the prior year’s version.

In short, Tesla can update its touchscreen dashboard nightly while other car manufacturers require you to buy a completely new car.

When you can operate in a user-feedback-informed design and production cycle so fast that your customers and competitors can’t even register the change before you’re well onto your next update, you win.

Col. Boyd called this “getting inside the other person’s decision cycle”.