Lawrence had a front row seat among the Arab forces that revolted against Turkish invaders in WWI—a revolt that led to the formation of Saudi Arabia. They were successful because they moved like “a vapor”. In contrast, Lawrence compared the Turkish army, a more formalized force, to “plants, immobile as a whole, firm-rooted, nourished through long stems to the head.” (All quotes are from The Seven Pillars of Wisdom).

Lawrence and the Arabs were victorious; the firm-rooted Turks could not avoid being outmaneuvered by the vaporous Arabs. A similar story plays out with the German Blitzkrieg in WWII and in many other business and military settings.

In the business world, “vaporous” is an insightful description of the Toyota Production System. The TPS’s defining goal is to continuously rebuild itself by empowering every employee to help the company build cars faster. Despite their attempts to copy everything Toyota did in its operations, the American automakers missed this point entirely; their manufacturing processes remained firm-rooted. The American Big-3 automakers saw strategy as collecting best practices; Toyota built a culture of continuous improvement into a competitive advantage.

Most larger companies today are firm-rooted. Startups, though, are vaporous—they have to be, the roots haven’t developed yet.

Eric Ries put a taxonomy behind what it means to be a highly mobile learning organization with his 2011 book. Eric, when he was raising money for his own startup, ran into investor Steve Blank who made Eric take his course on rapid-cycle product development as a pre-condition for Steve investing. Thus, if Eric is the father of the Lean Startup approach, I like to think of Steve as its godfather.

Still, it should be repeated, as with Lawrence of Arabia, that the idea was not new. Shakespeare, for example, 400 years earlier, finalized his plays only after watching them being performed and hearing the audience’s reactions; he committed to nothing within the confines of his studio. Companies just lost sight of this approach as bureaucracy and hubris reigned in the latter half of the 20th century.

Most startups I see are disciples of the Lean approach, my own included. A few guiding principles include:

The startups and product development groups I’ve been a part of follow the “lean startup” approach closely…I believe most startups do nowadays.

Despite all of its strengths, the lean / agile approach has a few drawbacks in my observation:

1) It doesn’t supplant the need for strategy
You can’t use an MVP approach with very little product and let your users help shape it into a profitable product from nothing; strategies don’t appear from product feedback. What if the product iteration cycle leads you to a low $ value pool and thus a low price point?

One thing I’ve noticed is that the power of the MVP approach has made startups and product designers lazy about strategy: why do the hard work of thinking and planning when rapid customer feedback will lead us where we need to go?

2) What if gaining access to users requires signing a pilot customer … and that takes twelve months?
Short development cycles and then getting the product into the hands of users is important. But it has constraints. When serving hospitals, for example, the sales cycle (to get approved, contracted, and installed even for them to try a product for free) takes at least six months. You have six months to burn before it gets into the hands of users; you have to build and develop while you’re waiting based on the best information you have.

3) What if your user base is neither large nor forgiving?
The MVP approach in its most extreme state is where you have millions of B2C users who will test something out, provide feedback, and keep using while it improves. In a B2B model, you may only have a few users at a client.

Reid Hoffman, the founder of LinkedIn, has a famous quote, “If you are not embarrassed by the first version of your product, you’ve launched too late.” That quote might sound odd to a developer of elevators, motorcycle brakes, jet engines, or a hospital communication tool. “Okay, I grant you that our initial elevator plummeted thirty-four stories causing both injury and the complete cancellation of every contracted order we have… but aren’t you supposed to be embarrassed by your first version?” is something we’re unlikely to hear at a press conference.

For many B2B and critical products, if a couple users give up on your product because it was given to them too early to be viable, you won’t have a long line waiting to keep the MVP iteration cycle alive.

4) And finally, the term “lean startup” …
I prefer the term “fast-product-feedback-loop” instead. “Lean Startup” has the word “startup” embedded in it. But the rapid iteration cycle mentality is about how to best serve customers and outpace your competition and it should apply as well to larger companies.

As startups grow, they move towards the safety and predictability of roots. They build command-and-control lines of authority so that newly hired employees won’t upset the delicately-balanced machine the founders created. They build out familiar marketing, finance, and HR teams to play back-office roles needed to nourish the increasingly immobile plant.

Sodexo, a workplace consultancy, labeled the “agile organization” as its top global workplace trend in a report issued at the end of 2017. The characteristics of an agile organization, in their view, were “moving quickly to market”, “nimble and responsive”, “common orientation towards organizational goals”, and “achieving a balance between speed and stability”.

It’s what I call a “highly mobile organization” with “fast-product-feedback-loops”; other terms are lean or agile.

Accenture studied 277 companies. The ones with higher levels of both a stabilizing central strategy and velocity were over four times more likely to be seen as outstanding performers in their industries than those who lacked both.

Fast-product-feedback-loops ideally should be focused in areas where the team can control the speed of the intervention—i.e. not where customers, suppliers, or competitors can set up speed bumps (in which case, we might as well proceed more slowly with formal coordination). Uber, when it launched, was able to set the speed of innovation—neither users, local regulatory bodies, nor taxi companies (i.e. their competitors) could say “hold up; let’s wait six months and see if this is a good idea.” Other innovations have to move slower, such as B2B enterprise contracts because the buyers prefer to slow down the speed of sales and software updates to avoid too much risk or disruption.

If you can control the pace of innovating better for your customers and remain mobile, one benefit is that you can ignore competitor reactions. In contrast, if your quarterly earnings are predictable (which your Board and Wall Street demand), then by definition, aren’t you immobile?
So why aren’t more companies more oriented to speed and constant customer feedback? Why can’t they operate with faster design and production feedback loops?

Because it is harder.

Because you need to build the lean / highly mobile / fast-product-feedback-loop mindset into your culture and into new hires as they come on board.

Because choosing command-and-control and a focus on systematic earnings targets feels more comfortable.

I’m not the first person to use Lawrence as an example of a decentralized, fast decision-and-action cycle leader, but I may be the first to point out how sore his feet were from doing it. 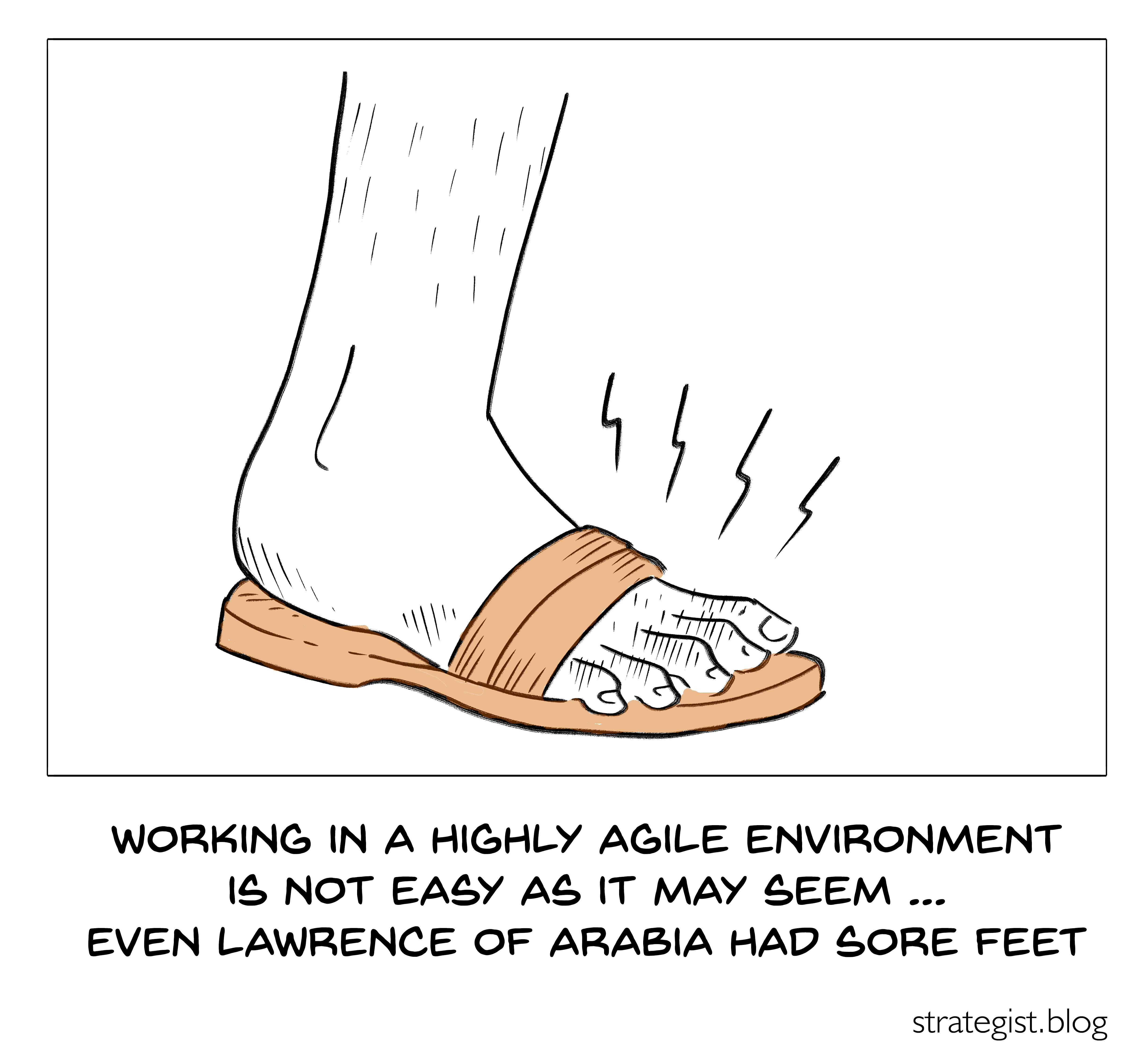 Despite how the movie may have glorified his time in Arabia, the quotes above remind us of the truth: Lawrence was constantly uncomfortable. What he did was hard, far harder than remaining in an army tent in a camped location with British colleagues. The cost of being uncomfortable is far outweighed by the benefits in the long-term, but how many corporate leaders have the confidence and grit to do so?