This is Part 9/18 in the series “How to Build an Innovative New Product or Company” on the topic of entrepreneurial fundraising, specifically for a seed round

The good news is—it’s possible. I’ve been part of startups that have raised between $4 and $17M. I’ve observed and advised colleagues as they’ve raised $2–5M in a few months for their first venture.

I’ve also seen entrepreneurs with great ideas and passion struggling to raise anything at all.

The main difference is (a) your strategy, (b) the record and commitment of team that you’ve assembled, including yourself, and (c) your ability to tell that story.

In terms of (a), some funds only invest in B2B companies because they know there’s high risk and cost of acquiring customers in a B2C model. Investors may also only invest in companies who are local to them and who are focused in industries that the investors know well. If your venture is one that reduces hospital patient falls, for example, you will certainly find a stronger receptive audience if you talk to investors who have been nurses or who work in hospital leadership roles because they know that the problem exists. If that’s not possible, find those people who can validate the problem and bring them on in some advisory capacity so that investors can see an independent validation of the problem and your solution. This is stronger if those advisors commit to investing as part of the round themselves.

Further building on (a) - your strategy should be anchored in a value pool. Investors prefer startups that are playing in large value pools. Having said that …

Investors may need a little educating on this front. If they don’t accept it from you, perhaps they’ll take it from Peter Thiel, founder of PayPal (italics are in the original) from his book “Zero to One”:

A colleague’s startup that I was observing recently had a smart strategy: take a product where they already had a proof point and simply expand it in the first phase to dominate a $30M market. Then build on that base of usership in a second phase to expand into the full $100M+ market. There is no such thing as a strategy that says you’re going to win by getting a small part of a large market; that’s simply avoiding doing the real thinking about how you’re going to win. Unfortunately, some investors looked at the market size of the first phase and didn’t look much further. 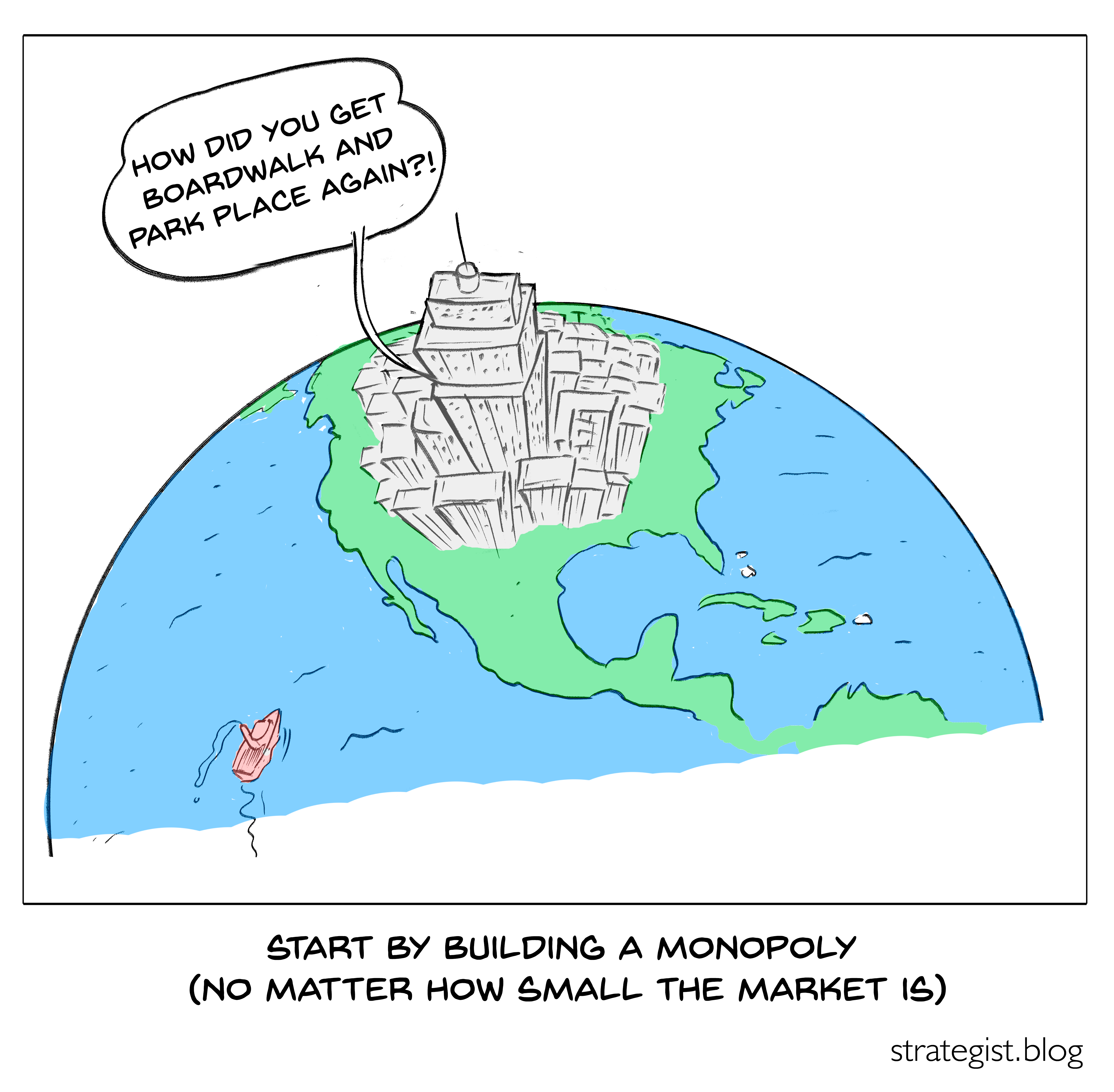 Your goal as a business owner is to win. GM’s innovative car brand Saturn is a classic case study in half-heartedly going after a large market. GM invested only enough (in commitment, drive, and resources) to make Saturn a player in the market while all of its competitors were battling for survival. As a startup, your only option means winning in a small, winnable segment and then expanding into larger ones.

For a seed/angel round, the only other difference about how easy it is going to be is whether you have trust-based relationships in place with private investors. For a venture round, which typically applies when you have $5M+ in revenue and are looking to raise $10–30M to scale to the next level, how easy it’s going to be is based on the size of the value pool you’re going after and the strength of the team and your current revenue/customer base.

Raising money is a full-time job. It takes hours a day for weeks and months.

I’ve talked in prior articles about how important it is to have members of a founding team deeply know the buyers and the users. Raising funds is similar; if you know people who are investors, it makes things much easier. If you personally do not, consider keeping a spot on your team or your Board open for someone who can make those connections can be one shortcut.
Some companies have founders who were born into a world of connections. There’s one company I know whose founder’s grandfather started a company and that company became his grandson’s anchor customer when he went to start one. If you have close connections like that you probably don’t need to read any further.

One legal note: there are restrictions to how you can solicit investments. The fact that companies can raise money outside of the public markets (e.g. an IPO) is due to an exception to an SEC rule that, if you break it, will prohibit your ability to raise money privately. You’re unlikely to break this rule - just don’t mass email people suggesting that you’re raising funds.

The best advice is to go out and talk to people without your pitch deck. Get comfortable telling a story, like the outline above, in two minutes. Find local entrepreneurs and get their advice on whom to talk to. Talk to managers of local incubators. Look for companies that are in your industry and have a similar size or location as yours and look on CrunchBase to see who funded them. Note that this may only reveal venture funds; angel/seed-round investors may not be listed.

For seed-round investing especially, I have found that investors prefer to invest both locally and with entrepreneurs they have a personal connection to. Part of the reason may simply be it’s so hard for even experienced investors to really know whether a company will take off or not and so this is one good way to filter the potential options.

gust.com and AngelList (angel.co) are websites that can help match startups to angel investors although I haven’t known anyone who has successfully used them, perhaps because it’s hard for investors to filter through the many opportunities on them.

Ultimately someone will hear your story and say “I need to introduce you to so-and-so.” If that doesn’t happen, keep refining and trying. There’s no shortcut. Raising money is a lot of work - but no more work than finding a problem, building a solution, finding and serving and delighting customers… it’s all equally tough. If you give up on this step, odds are you would have given up on a later step anyway.

If you’re a company with some assets and revenue and looking to grow, can you do it with a loan? A loan avoids giving away equity. Chobani yogurt was actually started this way. Alibaba also grew without capital. “In 1995, I started my business with nothing. Capital consisted of collective willpower and teamwork. Many entrepreneurs say without money they can’t start anything. That is wrong. Entrepreneurs should be guided by responsibility and teamwork, not money,” said Jack Ma, founder of Alibaba, at Alibaba’s 5th E-Business Champions Awards Ceremony in 2008.

Be persistent but polite. People are busy. Get their cell phone number and text if you can - it tends to get a quicker answer over email. Have an update to share every three to five weeks with everyone you have in the process - sales contract you’ve signed, product updates, relationships you’ve put into place. Over time, telling a story of continued growth is a great way to get or keep a potential investor excited.

Many universities today have a commercialization and angel investing network. These groups are typically local investors who appear once or twice a month to hear pitches by vetted and university-affiliated startups. They may choose to invest individually or collectively.

I’ve never used SBIR/STTR grants but colleagues of mine have built companies starting with them. These are federal grant programs that offer multiple rounds of essentially free money. Specifically, they are non-dilutive funds for small companies commercializing innovative solutions to topics of interest to government agencies and which solve a large $ customer pain point. In other words, they have the exact same priorities that other investors have.

The majority of the grants/contracts are from DoD, HHS/NIH and the Department of Education. Other agencies include NASA, NSF, USDA, EPA, DOT, and DHS. For market potential, the DoD, NASA, and others may be a potential customer at the end of the program (i.e. they give you a contract); the other agencies require you to identify your customer (i.e. they give you a grant).

STTR requires a university research partner; SBIR has no such restriction. Both require that you have a team member that has the credentials (such as, but not necessarily, a PhD or a prior lead research position in a large company) to conduct the core research. With STTR, you can leverage a university partner for that requirement; SBIR requires that person to be primarily employed on your team once the grant is issued.

Qualcomm and 23andme are examples of startups that began with these grants. Navigating the programs requires a bit of expertise but North Carolina, for example, like many states, has a non-profit small business technology development center that offers pro bono advice for startups applying for the grants.

Three questions they may ask are:

(2) What is the pre-money valuation?

(3) How did you get your valuation?

In the seed round stage of the companies I’ve been a part of, as well as a colleague’s round that I observed, we split the round into two tranches. Leaving the first tranche window open for, say three months, allowed anyone who was able to get their funds in at that time to do so. Anyone who committed to putting some of their funds in the second tranche, which, say remained open for another six months, allowed the company to get access to funds early while removing the pressure from all the investors to get all their funds in as quickly. Investors who committed to the second tranche but didn’t do so lost their Class A shares - even for funds put in earlier, so the risk to the startups were limited.

Another option for a first raise is convertible notes: they buy into the company now, but the pre-money valuation that applies to that investment is set only on a later round.

All of these steps are much easier when you can say, “I have an investor who’s already committed for $250k and has set the pre-money valuation. Tranche one is going to close based on their timing in the next two to three months.” Getting investors to piggyback on someone else’s due diligence … creating a reason for moving now versus six months from now … creating the evidence of social proof … these are what get investors to go from “interesting idea” to “how and when do I get in?”