Finally, the entrepreneur thinks, the moment to name my new company—a chance at fun and levity!

An evanescent oasis from the eternal desert of agony that crafting my new enterprise so far has been!

A moment like the final few steps before a mountain summit—a reward so sweet for so little work only because it ruthlessly pilfers from the coffers of the thousands of steps already taken!

Sure, naming my company is a step that could be outsourced but why do all that hard work and then pay someone else for to bask in the glow of the one joyful shining moment?

Then… how quickly this step, too, dissolves into horror and chaos. Like a songwriter who, upon trying every chord progression she can possibly think of, realizes that every song has already been written.

Denial leads to anger … anger leads to bargaining, “Why, oh benevolent Lord, do You grace ‘Apple’ with such a simple name but all that is left for me is JesuitNinny.com? Where have I wronged You? What sacrifice will reverse Your decision?” 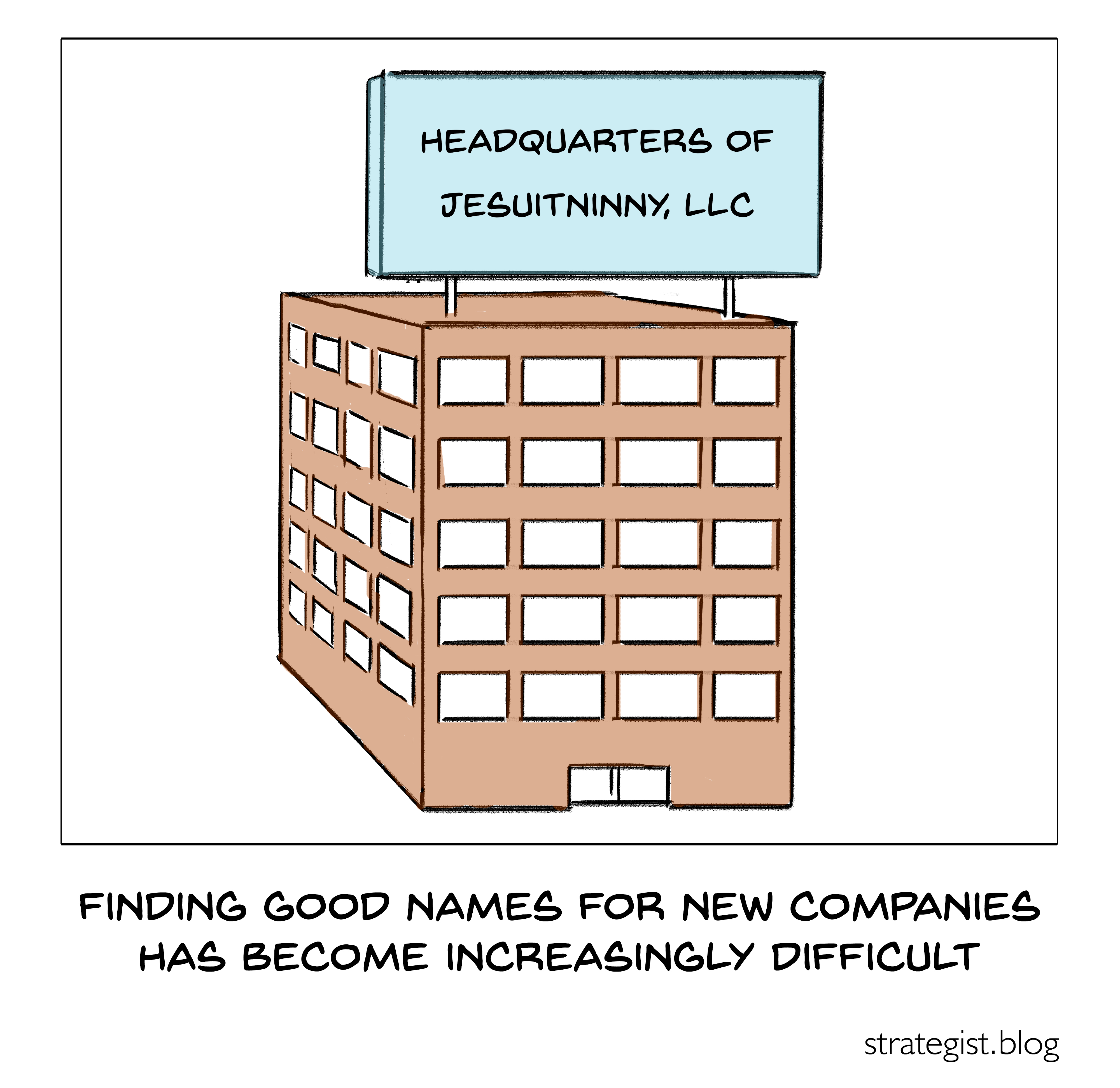 Bargaining leads to depression. You started the process of naming your company so bright-eyed and full of hope and youthful energy and now, barely able to get yourself out of bed in the morning, you are willing to prostitute your company in any way to get through the naming process with a shred of a worthy outcome.

Depression finally leads to acceptance. If there were any good names left, someone would have already found them. What you need is not a name that you’ll want tattooed with pride on your arm, but a simple .com, five to nine letters long, easy to spell, and that has some relevance to the direction/values/mission of your company, however remote.

This advice came out of going through the naming process a couple of times. My current company, Laudio, is focused on helping managers in healthcare better recognize and support their staff. The Latin root we found is “laud”, from which derives laudatory and applaud. A quick search on GoDaddy auctions found Laudio.com and then we acquired the trademark shortly afterwards. This whole naming process was done in about an hour—though admittedly after spending months on other approaches.

One nice side effect of this process was it gave us a “naming story”. Prospective customers often ask how we came up with the name and we explain the Latin root. It helps tie our mission and product together in the name, something that actually has quite a bit of value.

Companies that appear to use a similar process to this include the shoe company Zappos, from the Spanish word “zapato”.

Keep looping. I’ve tried a lot of methods and this one has been the most fruitful. Any nice sounding, reasonably short, easy to spell .com will be taken. Auctions allow you to buy one of them for $1k-$3k. You can also search for more freely available domain names of course, but my experience that is you’ll be limited to 10-13 letter names.

Say the name to people. How does it sound being said? Do people ask you to spell it?

Don’t rush into naming. You can keep yourself under a working name for a while. You can even incorporate and contract under a working name and update contracts later on. Make sure the mission and direction of the company are tightened before committing to a name. The cost and burden of re-branding later on are worth taking some added caution up front. In my current startup, we operated for about a year under a broad name (such as “Orange”) that we liked but which was so commonplace, we knew we’d have to at least tweak it to get a trademark.

Do you need a .com? Perhaps not. There is a trend to naming companies “tryorange.com” or “orangeapp.com”. The only issue here is that the odds are low that you’ll get Orange as a trademark in your industry and if you start branding and launching without a trademark, you’re liable to a lawsuit later on that will force you to change your name. If you can get the “.com”, odds are reasonable you can also get the trademark.

Working with a copyright/trademark attorney to register your name is a good step. They will search copyright databases that you can also check: http://cocatalog.loc.gov/