The New England Patriots played the Atlanta Falcons in Superbowl LI on February 5, 2017, the final game of the 2016 NFL season. The Patriots were down 21-0 with 5 seconds left in the first half when they finally scored 3 points. The score was still lopsided at 10 minutes left in regulation time when the Patriots kicked a field goal, taking the score to 28-12.

At this point, it was reported by statisticians that the Patriots’ chances of winning were about 0.3% (though anyone who has seen Tom Brady and the Patriots play a fourth quarter should have been skeptical about those odds). I had a Boston-based colleague who was talked into flying down and buying a ticket to the game by a friend of his; a Patriot fan, he was sitting in his seat at the stadium cursing the friend and searching for earlier flights home at this point.

The Patriots, down by 16, then pulled off an incredible succession of plays: a sack on Falcons’ quarterback Matt Ryan that led to a fumble, which Brady and the Patriots then took down the field for a touchdown. They made a two-point conversion (in itself a rare event), then held the Falcons, got the ball back, drove 91 yards down the field, scored another touchdown, and capped it off with a second two-point conversion to tie the game with less than a minute left. The Patriots then won the coin toss in overtime and Brady completed one pass after another leading to a game-winning touchdown a few minutes later.

The final ten minutes was flawless execution, pass completions, and scoring… which makes the question of why they weren’t able to do anything in the first thirty minutes such a compelling one.

What struck me, as I was a Boston resident at the time and had seen many similar great comebacks engineered by the Patriots, was how typical this was for the team. It seems as natural to watch the Patriots struggle early as it is to watch them easily assemble a series of long and flawless scoring drives later in a game.

The one chart that explains it

The Falcons played man-to-man defensive coverage against the Patriots. This worked well early in the game when they were able to cover them and stop Brady’s ability to complete passes. But in a game that lasted almost four hours start-to-finish, they became exhausted chasing around fast receivers. As one commentator wrote after the game, “keep a defense on the field long enough and eventually it’ll break.”

The top chart below shows the average number of yards the six most-mobile Patriots offensive players ran during the game, the same for the six most-mobile Falcons defensive players, and below both of those, the total actual yards gained by the Patriots offense. The x-axis is in terms of actual time: from start to end, the game ran about 230 minutes, though it included interruptions, such as about 30 minutes for halftime.

What you can see is that the average Patriot offensive player ran about 1,000 yards compared to about 850 for the average Falcon defender. The Patriots picked up 543 yards as a team.

In other words, the Patriots made the average Falcons secondary defender run 56% more yards than they picked up.

In bottom chart shows the same thing for when the Falcons were on the field. They picked up 351 yards total in the game which was almost exactly how much the average Patriot secondary defender ran.

In short, the Falcons defense was tired out by the end of the game. The Patriots employed plays that made them move far more than the Falcons’ play calling made the Patriots’ defenders move. 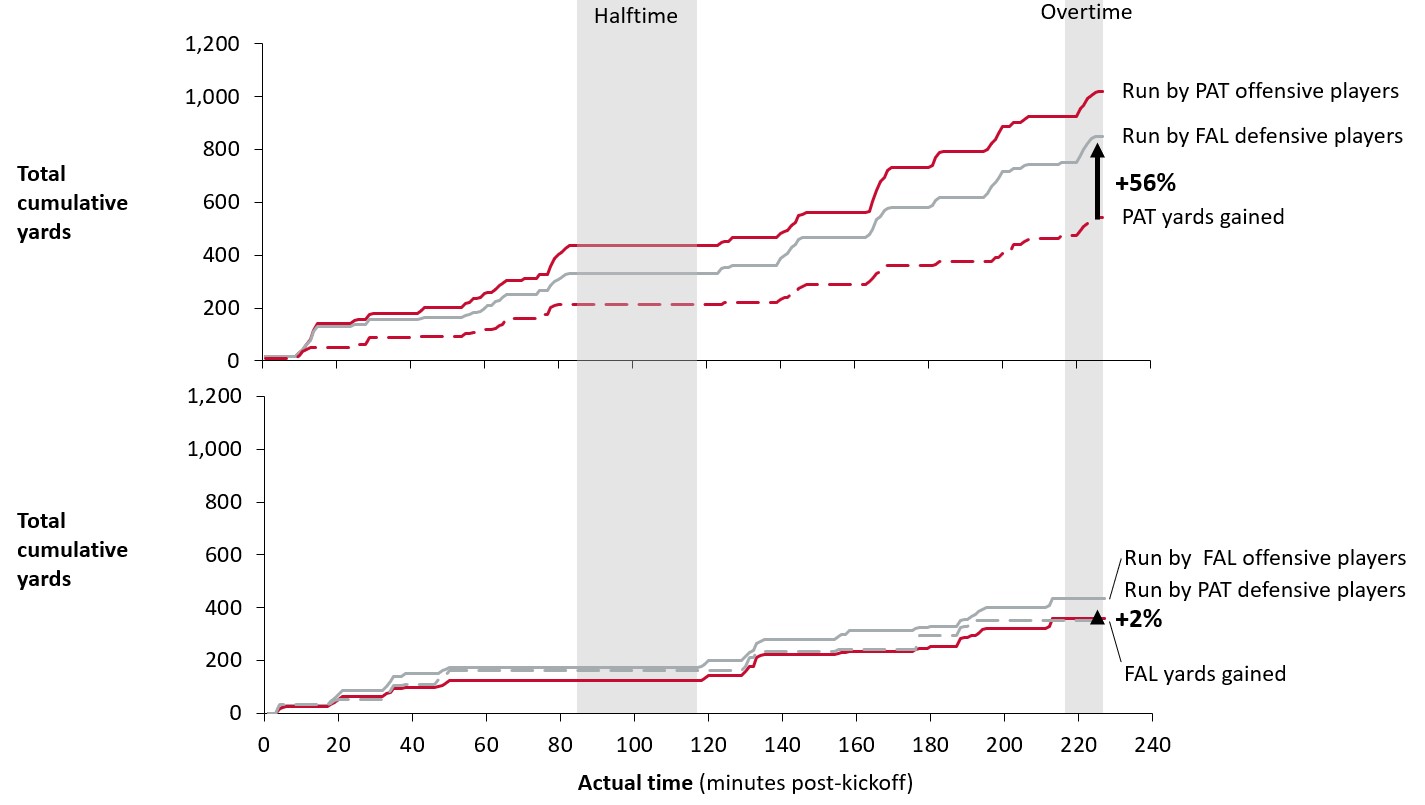 The Patriots systematically invested in wearing the defense down from the beginning of the game and it didn’t fluster them that the return of that strategy didn’t start kicking in until they were down by many points with only a few minutes left to go: they knew that once they had the defense worn out, the rest of the game would be close to toss-and-catch for them.

The first play in overtime is a good example of how the Patriots caused the Falcons to run. The Patriots (the ‘O’s) lined up with a running back and three wide receivers. The Falcons had two defenders in the backfield (about 20 yards behind the line) and other defenders covering the three receivers man-to-man. If Brady had thrown a 20-yard pass, these deep defenders would have run very little: they would have been ready and waiting for the ball while the Patriot receivers ran the 20 yards to get to them. But Brady threw a short pass to the left to the running back (shown in blue) who then ran a short few yards along the left sideline. This drew five of the defenders over—with the two deep defenders running at least 30 yards to get to the ball. The play ended in a five-yard gain for the Patriots and 20-30 yards run by each of five defenders on the Falcons. 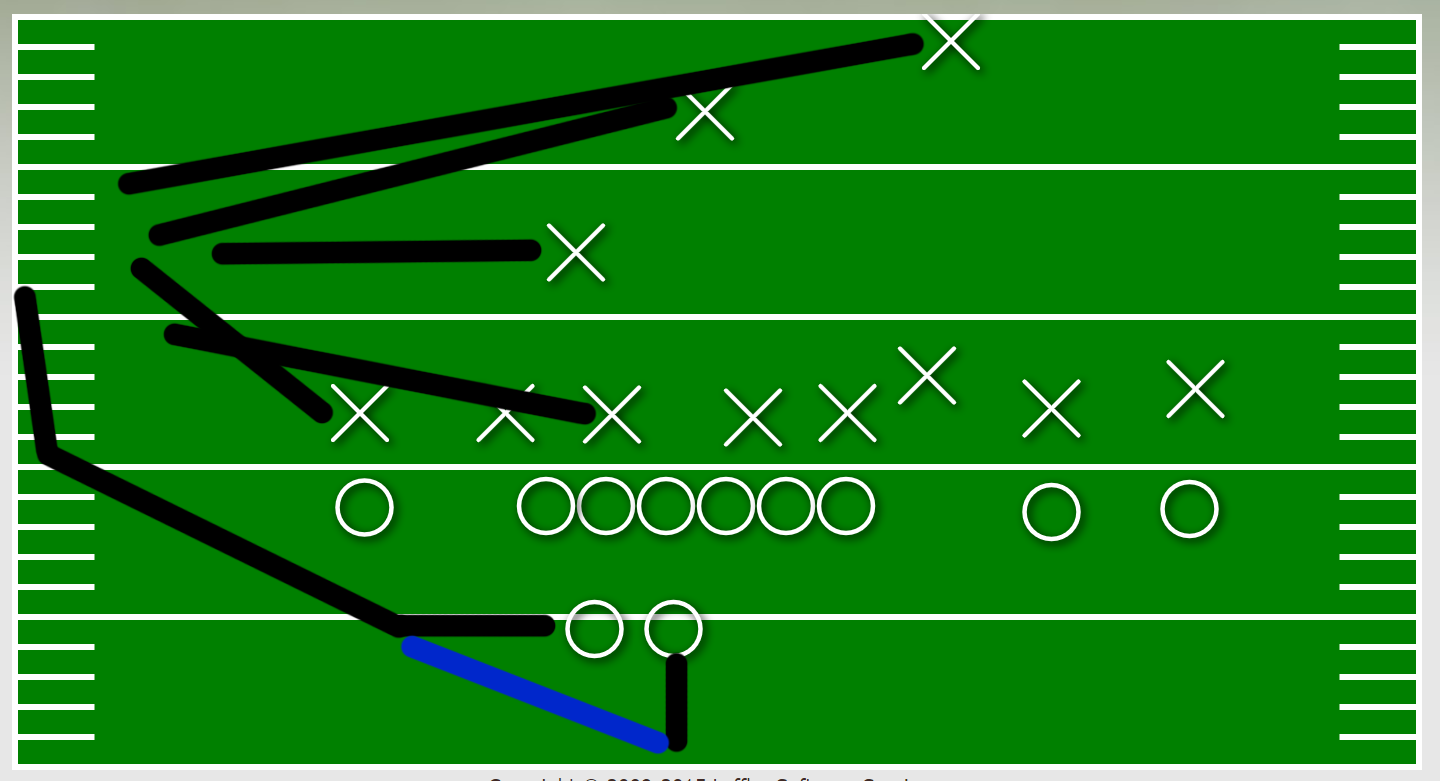 What does this mean for strategists?

In football, the objective is to defeat your opponent. In business, the goal is decidedly different: to better serve your chosen customers and continue to delight and create value for them.

But the Patriots’ strategy still has relevance. I think there are two lessons.

First, play the long game. Invest today in small events and decisions that add to give you advantages months and years in the future. If you can create a platform where you are creating value for your customers 18 months from now as easily as the Patriots were picking apart the Falcons’ defense in the final few minutes, wouldn’t you? Even if that means taking actions today that may seem wasted in the near term when things don’t easily go in your direction.

Second, mobility is an offensive asset. If you consistently move fast enough, competitors will be unable to keep chasing you. Mobility is one of the greatest sources of competitive advantage. It’s perhaps a bit of a stretch to compare the Patriots’ physical mobility with a company’s ability to constantly iterate and improve its products, but both are the anti-thesis of sitting still. Spend your time finding new sources of value for your customers not building walls (e.g., patents) around immobile product features that haven’t and won’t ever evolve.