Some of the most important lessons I’ve learned were from the founder of a company that I was part of a few years ago. A remarkable man, the company he had founded about twenty years earlier had gone through several major iterations.

In the beginning, he was a medical illustrator supporting lawyers in medical malpractice court cases. He told me about his early days in the courtroom. He had no clients so he would put on a suit and hang around the courthouse with his typical optimistic vim. He got to know all of the medical lawyers by doing that and when he bumped into them, he’d mentioned he was “supporting a trial down the hall but give me a call if I can support you some time.” There was no other case down the hall but that’s what an entrepreneur sometimes has to do. You have to live in the world that you’re imagining and will it into existence.

Some people call it “fake it until you make it.” Perhaps—but one lesson I learned was that there was nothing faked about his approach. In his mind, he belonged to be in the courthouse and when he said he had a client down the hall, he was talking about a future client that he knew he would have. The minor dimension of time was irrelevant.

By the time I knew him, the company had evolved into a medical e-learning platform. When I first joined, my desk was right across from his office and his door was always open. If the sound of his phone calls didn’t remind me of his presence, every few hours, the sound of twenty-five-pound curling weights being dropped onto the floor did.

My view of salespeople at that time was that they should be helpful to the buyer but not overly burdensome to them. That was not our founder’s point of view. He believed so strongly that patients’ lives were at risk if a hospital didn’t use our e-learning that he saw it as his responsibility to will obstacles out of the way.

There was one poor buyer at a large health system who had begun the process of buying our software but could not have possibly moved fast enough. I’d watch him every day. He’d call and leave an urgent message on her voicemail. He’d text her. He’d call again. He’d send an email. He repeated this every day. Months later, she told us later how bothered she had been by it and joked about a restraining order. He was as unnecessarily repetitive as “24 Hours to Midnight” is as the title of a spy film. But he believed so strongly in his moral obligation that none of that affected him—and customers usually saw that too. It didn’t feel like salesmanship.

Twenty years into his company and he was still hustling for customers like a Moroccan street vendor. Very few people ever called him back but that didn’t matter. He preached his version of the Gospel every day for so long over time that many people rallied behind him—employees and customers. 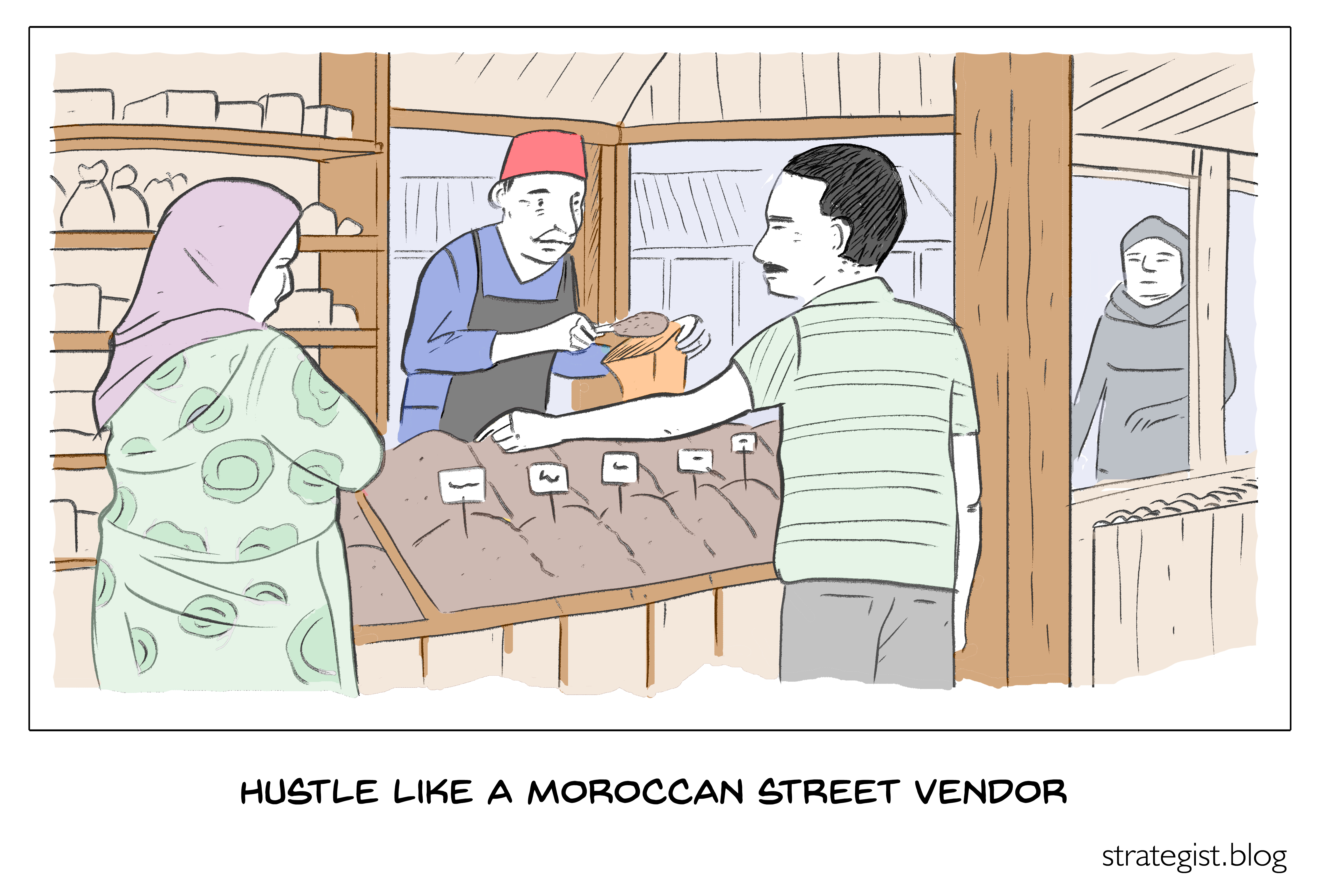 Whom you work with makes all the difference. It really matters who the first few employees are for a new venture.

Startups typically have two to three founders, though my current venture has four. Most of the founders I know have over ten years’ work experience and have been part of other startups in the past. There is an image of the college dropout founding companies but many are mid-career.

I think you need three things in your founding team. You need:

1) The smallest set of initial team members who both complement each other’s skill sets and cover the fundamentals needed to launch the business.
You need at least one person who deeply knows the buyers and the users and has warm connections to them (you’ll need them to support sales and product feedback sessions). At least one person who is an expert in the major technologies and/or trends you are applying to solve a major topic for the buyers/users. Potentially someone who has a lot of strong connections with investors who can help make fundraising easy. This person need not be a full-time employee; this is a great spot for a Board Director.

At least one person needs to have deep experience as a product manager and/or building products in an agile, customer-centered way.

2) Founders who are scrappy and pragmatic. Founders who …
You need founders who hustle to get things done. Founders who, regardless of their role in the company, will go off on their own and find a customer in the early days by knocking on doors in their spare time.

Founders who are MacGyvers, to reference the popular 1980s TV show. Founders who chip away at a problem day after day, who can take one obstacle at a time and not be overwhelmed by the sheer expanse of problems yet to be solved. USAF Col. John Boyd said “A winner is someone that can build snowmobiles…” His observation was that snowmobiles are a collection of existing parts from other vehicles (sleds, tractor treads, a motor) and so someone needed to have the creativity to see the parts and imagine them as a new product.

Angela Duckworth’s book “Grit” attempts to capture similar ideas. She writes that high grit people make things happen; they are self-starters; they chip away at a problem for a long time; they don’t get discouraged by setbacks.

In contrast, in 1940, Albert E.N. Gray wrote in “The Common Denominator of Success”:

Of course, hard work and perseverance (i.e. grit) matter. But I believe the types of work people are willing to do matters much more.
Build your founding team full of people who roll up their sleeves and do the hard work that most people don’t want to do. Those people do that hard, sometimes unhappy work because what drives their day-to-day behaviors is a focus on long-term results, not the satisfaction of achieving near-term gains.

3) Founders who have worked together before
I’ve almost always worked on my startups with the same small group of people. Some come and go over time, but the team is consistent enough that when we’re building something new, communication can be implicit.

For fundraising, showing a core team that has worked together is a major bonus. If the team doesn’t know each other, there’s a more significant risk that they’ll fall into one of the most common pitfalls of all startups: self-implosion. Investors often invest more in the team than the product. The reason is that there’s two options for any product: it’s either a brand-new idea that no one has seen before or there are several similar competitors out there. For the former, investors will never get enough proof that something unproven is actually going to work so they can only bet on the team that will figure it out. For the latter, they’ll bet on the team that’s got the best chance of winning; the team that has the most experience building companies and the most expertise of the customer and the market. Either way, it’s the team.

Further, until you have worked alongside someone else, how can you really know they’d not only be a good hire, but also a worthy partner and co-founder? Some of us may have a missionary’s benevolence for seeing the potential in others, but that needs to be curtailed when assembling a founding team, it’s one moment that’s too risky time to gamble on.