“Change a Few Users a Lot”: Using e-learning to improve clinical outcomes in high-risk hospital-based events
In a prior company, we had a software-based platform to help doctors and nurses stay up to date with the latest standards of care in rare, high-risk events. Its goal was to improve their individual decision-making abilities, which then improved overall clinical outcomes. We sold our platform to hospitals under the premise that learning was needed by all clinicians on at least an annual basis. But how true was that?

Part of our e-learning was an assessment that was given to the clinicians before they took any learning. How they did on that assessment determined the learning they were then prescribed by the platform.

It’s true that the primary goal should be for everyone to improve a bit. Doing so creates a culture of vigilance. But a quick look at the assessment scores as they came in made it clear that it was a small group of low-scoring clinicians who created most of the patient safety risk.

So, while we publicly celebrated the incremental improvement everyone made on average through the e-learning, privately the discussions focused on what support and additional interventions were needed to shore up the small group who needed a lot more help.

“Change a Few Users a Lot”: Inventing a technology to reduce car emissions
In another example, imagine you wanted to build a product or service that would reduce car emissions. You’d probably start by thinking about what you could add to every car on the road. But, as Malcolm Gladwell shares in his article “Million-dollar Murray”, 5% of the vehicles on the road contribute 55% of the pollution, according to a Denver study.

In this case, if you want to have an impact, you first need to figure out which cars these ones are (e.g. older cars or sports cars) and design a process around them. Sure, you could design something for every car out there. Perhaps doing so would lead to higher profits because you’d have a larger market to sell into. But if your goal is impact, you can’t ignore the power law. 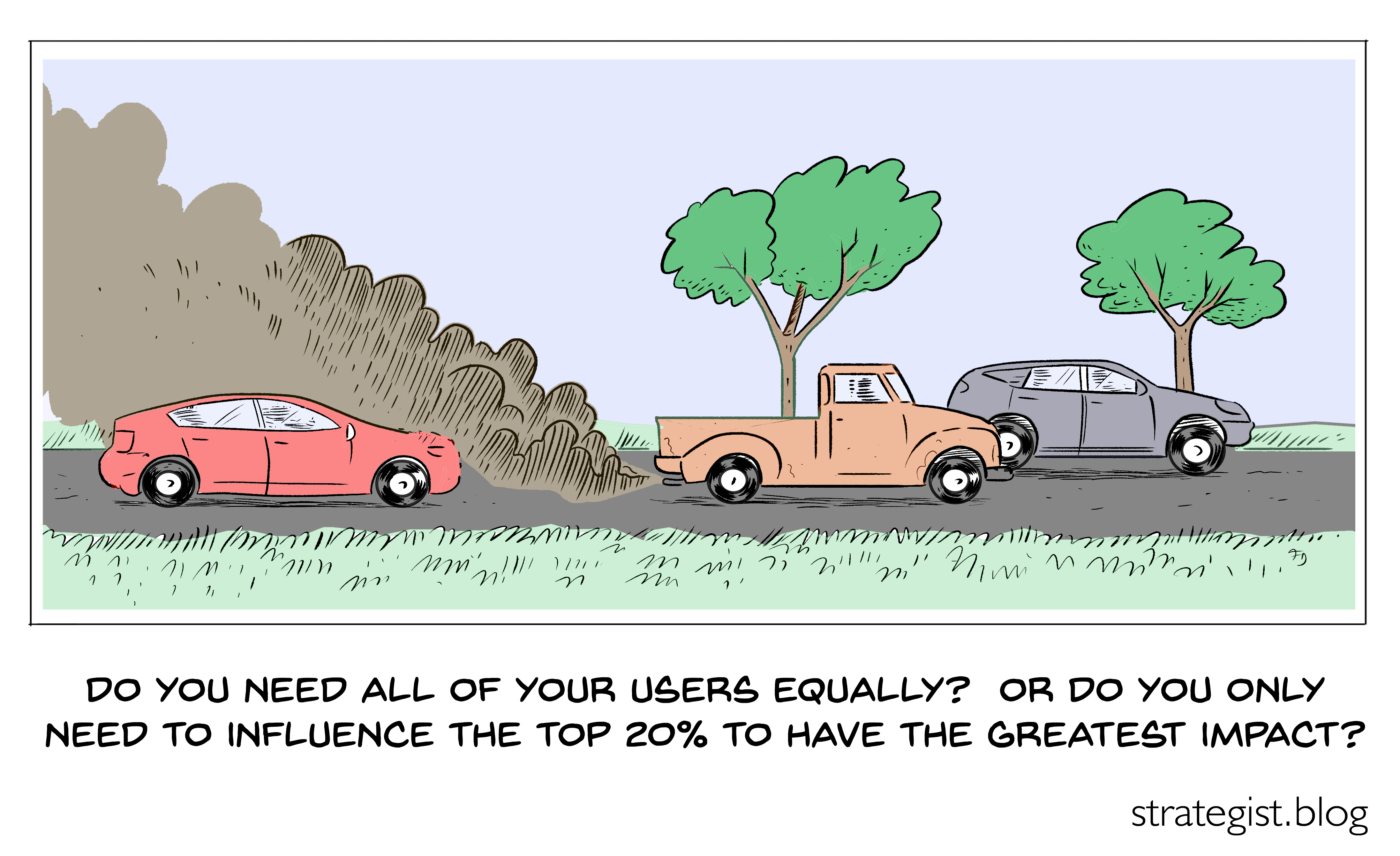 “Change a Few Users a Lot”: Reducing the costs of the homeless
Another example in Gladwell’s article discussed the medical and policing costs incurred caring for the chronically homeless amounts to tens or hundreds of thousands per year, per person. But that’s just for those who are chronically homeless; they account for just 5% of the homeless population at any point in time. If you want to put a real dent in reducing homelessness and the cost society absorbs from the homeless, you have to start with this group.

“Change All Users a Little”: Connecting people via a social network, e.g. Facebook
Facebook is an example where, for the product to be successful, you need a large number of people to all make a small change in their behaviors (e.g. to login to Facebook and read/like/post something every day or so).

Does your product need a component where you identify who the highest impact 5%, 10%, or 20% of users are? Is your product only going to be used by a small set of users?

If either of these are true, how does it change your market sizing? If this is a B2B product and the executive buyer realizes that only a few people on their staff will need to use your solution, will that affect your pricing?

From a pricing perspective, the ideal case is that everyone still has to use your product and you are able to claim value by the small behavior changes that result from that. Even if everyone uses your product, you would be well-advised to develop special features and interventions (on-platform and off-, such as via a client services team) specifically for the top 5%, 10%, or 20%.

How likely is it that this small set of users will change their behavior a lot? You may have to invest in hands-on client service support to get them there. There’s a general rule that, to have a product be successful, it cannot require users to change their core behaviors.

Such a product needs more investment to onboard users and train them on the new behaviors built into it. Such a product may find value in making social connections so that users can see the behaviors of other users as social proof.